I have known Rod for a while now and I have been for ever telling him that I'm going to stop by his place sometime soon. Well soon was Wednesday of last week. I didn't realize how far south he actually was. My truck is having issues with headwinds and the slightest of an up hill grade so It seemed like forever get'n there. The sun was setting and the deer were jumping by the time I pulled into the good ol' town of Du Bois. It's literally a one mule town..... with a bar at each end and a motorcycle shop top dead center and that is it. Beer and Motorcycles is all you will find in Du Bois IL.

I knew Grimey has an extreme love for two wheeled machines I just under estimated it's strength. Rod is kind of a quite guy but spend just one day with him in his shop you quickly realize how much knowledge and skill he tucks away under that hat. It's amazing how a shop can stay alive in a place like Du Bois but if you are doing good honest work the word and loyals will grow to a point where you can't keep up with work. Grimey does it all frames, engines..... you name it. 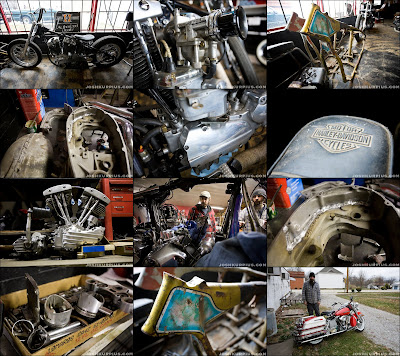 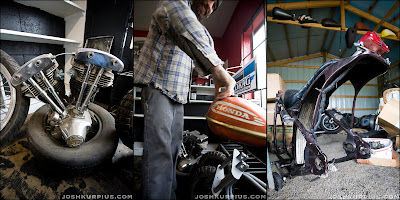 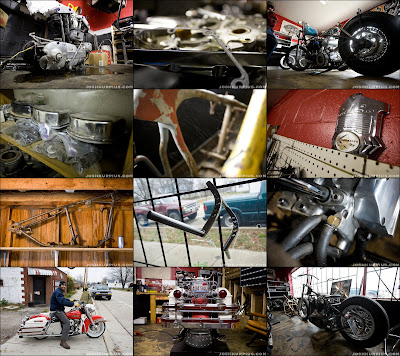 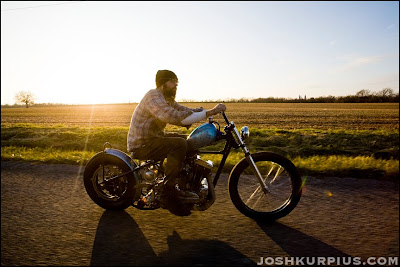 On Thursday I shot Rod's Ironhead. It's funny...... a year ago we were both at the Bare Knuckle Party and we were talking about up coming builds. At that time I was thinking about cutting the trans off a Ironhead... putting a four speed behind it then putting it all in a single downtube frame. He goes on to tell me that he just cut an Ironhead in two and made a single down tube frame with a Triumph neck casting and to top it all off he was going to put a Baker 6 in a 4 behind it. That Sum Bitch! Well at least if I have questions I know who to call. He put it together ran it about five miles then rode it from Arizona to North Carolina! That's some crazy shit! Much Respect
Stripped Down Cycles
Posted by Kid Kurpius at 7:19 PM

Hell ya Rod's a RULER

If your truck is dying then the tailgate on this one is all you:

If you wouldn't mind, tell Rod that Alvarez says hi and I hope his knuckles healed up well.