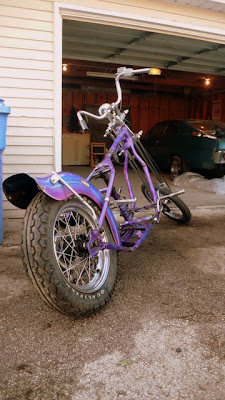 About a year ago I pulled up to a jobsite on the shovel and an older dude comes up to me with his cooler and starts talking bikes. He opens up his cooler and he's got a picture of his pan underneath his snacks and then he tells me that his hardtail days are over and that he'd be willing to swap a swingarm roller straight up for his wishbone roller. I started putting one together but I new the bike wasn't going anywhere so I sat on it. Fast forward a year and I'm talking with Jr. about projects and some parts I need which led him to remind me of the roller swap deal. I told him I'd give him the deal for the parts I needed and we made the deal. 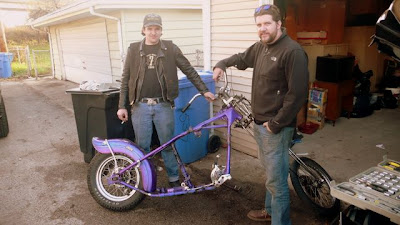 Bacon and Jr. with the new project. 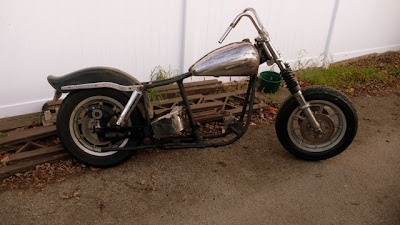 The roller Jr. whipped up. 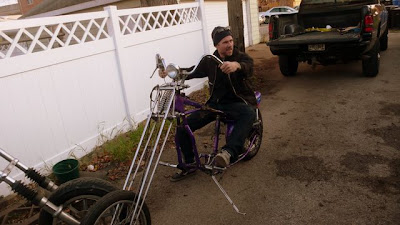 Me thinking I should've kept the deal.
Posted by B Harlow at 10:33 PM

so i heard that that bike was called purple haze? well anyways i was in chicago saturday night and stopped into a bar called "purple haze" and the bar tender was really hot and gave us all a free shot of jack.

someone in chicago needs to go "meet" that girl.

I'll send the youngsters over.

Thanks for the deal Mr. Harlow. Still want you to keep up with that guy. I want the tank and the seat still. Keep me posted.