Last Tuesday I went up to Milwaukee to shoot Warren and Bacon's new Pan. I chilled out with Bacon at the shop until about nine o'clock then we headed over to the bar that Candice tends. Bacon makes sure to walk her to the car every night at closing time and within two minutes of walking into the bar I quickly found out why. Not the greatest of crowds.... actually not a crowd at all. There were two people in the bar. You'd think it would be nice and quiet but that wasn't the case. There was an old man that obviously had a few screws lose and with an entire day of booze'n added on top of that..... he wasn't about to let someone call him a Tinkerbell. He was having a normal conversation with Bacon about motorcycle frames and how lightening goes from ground up then suddenly got pissed off because he thought I was calling him a Tinkerbell. I was just minding my own business eat'n a chicken sandwich. Just about then a big ol' black lady come run'n in demanding money from the ol' timer. They took it outside and he offered her all the quarters he had. She wasn't happy with the quarters and threw them all over the parking a lot. The old lady that was playing the slot machine all night with a six inch ash hanging off her lip come walking up and said... "yep.... She's gonna kick the shit out of him again because he wont give her his pay check" She grabbed the rest of his money..... 27 dollars...... off the bar and hid it so the Big Ol' black lady wouldn't take it. Miss old style looked like she was in her late sixties but seemed to be a gal about the town and was probably smoking hot in her hay day. She just kept saying "there better be a big fat joint waiting for me when I get home cause that sum bitch wrecked my car!" Big Black walked back in look'n for her 27 bucks but the Ol' lady told her she put it in the slot machine. "Ah helna.... that was my mo fuck'n twana saven dollas.... Bitch you best be figger'n it out." Ol' Man Chad said he needed that 27 dollars because big black was setting him up to get married to some girl he has never met. Everything calms for a second when Big Black leaves until the phones starts blow'n up. It was some dude threatening to kick Chad's ass when he gets on his bicycle to head home.... then Candice tells him he's not so he threatens to kick her ass too. So Candice grabbed her big can of Bear Mase and said if he comes in here run to the other end of the bar cause I'm gonna spray his ass. I told her... that crack head is gonna come in here with a gun and your Bear Mase ain't gonna do shit but hurt my eyes. So she called the cops and they sent the finest female officer I've ever seen and everyone was happy... at least I was. 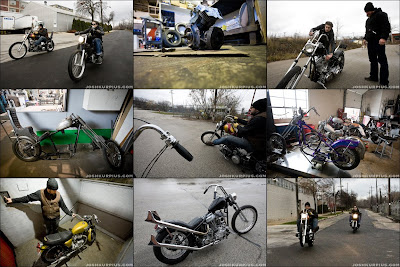 On Wednesday I shot the Panhead and we all took turns riding it. Since the pan didn't have plates Warren grabbed JP's Triumph from the depths of the compound and we all rode up town to grab a sandwich. 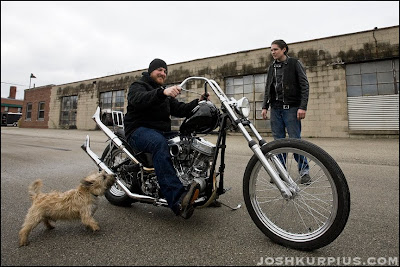 I forgot how fun it is jockey shifting! 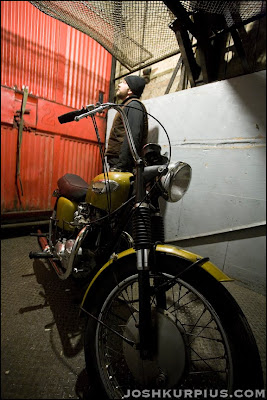 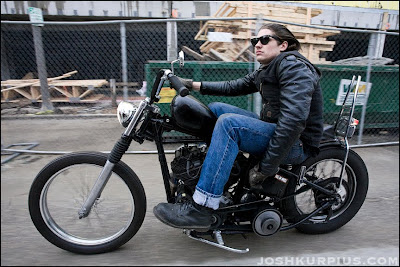 Bacon and his knuck 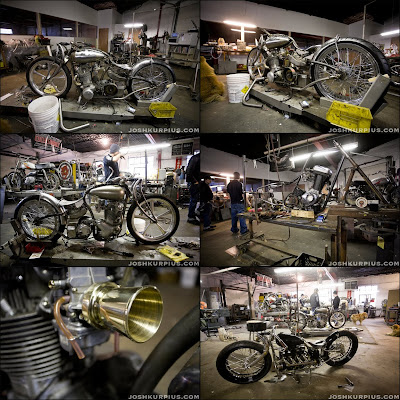 Popped in at Dave's shop. The Norton is moving right along.
Posted by Kid Kurpius at 1:19 AM

Thanks for coming kid! It was good to see you.

beautiful projects! What is the i4 motor at bottom right?

That's a honda 550 motor with a couple of modifications.