I didn't have a fuel tank for The Locust and I was building on a budget of zero dollars. I was chill'n at my good friend Bobby's place sitting around the garage bullshitting with some friends. Mike was in the process of building his bike at Bobby's shop and said I could have a tank that he started to narrow but got frustrated with. The price was right so I snatched it up. I was informed that... dat rite dere was the "Rotton Randy" tank. Apparently some guy named Randy owned it at one time and wanted Rotten Randy painted across the tank.... when it came back from the painter it said "Rotton Randy" 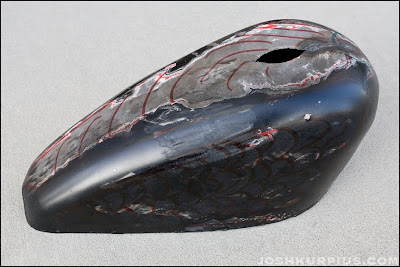 The "Rotton Randy" Tank as I got it. 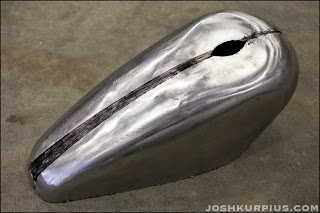 I started by getting rid of all the paint and bondo then marking what I planned to cut out. He narrowed more in the front than in the back so I narrowed it some more in the back. 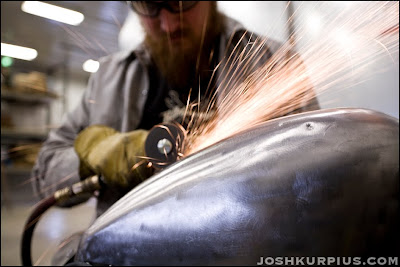 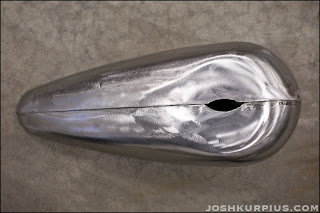 The two halves waiting to be tacked. Up until this point I had only welded on thick steel. The first thing I did was blow a few nice size holes in my tank. But it was alright because I planned on cutting out the middle anyway.

After narrowing it a little more I cleaned the metal on the inside of the tank and added to the bottom front to give me more fuel capacity.

I then bent some round rod in an organic fashion and welded it to the tank. 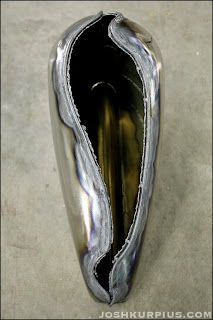 Torched out the middle.

I didn't know the first thing about shaping metal. I wanted the middle to be dished so this is what I came up with. Two plywood templates some bolts and a little heat dished my sheet metal nicely. The heat alone did most of the dishing for me. 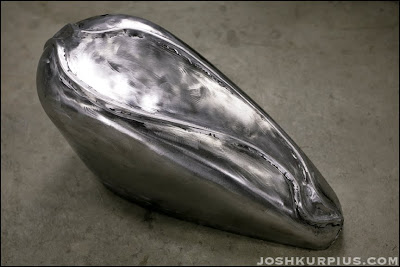 The finished tank minus filler cap and petcock bung

There's a fine line between insanity and genius. You, my friend, dance on it nicely.

well heck yeah man, best way to learn something is to just do it.

very nicely done Kid!! Can't wait to give you a big man hug in June.

How did you hammer out the flat spot on the top of this tank? Sandbag and mallet?