As I stated before I was able to score a pile of Ironhead parts from a gray bread. In the pile was an original frame and a brand new Paughco Rigid frame that had some rake. Times were extremely tuff back then so the ability to put together a bike was just not in the cards. Rich Phillips in St. Louis offered to build me a bike with the pieces I already had. I could not refuse his offer so I brought him my original frame to cut up and make a rigid out of. I gave him free rein to do whatever he wanted with it. In no time he built a bitch'n little frame and things were going together well. At about this time Rich's seat business started getting really busy and he had a lot going on outside of that. 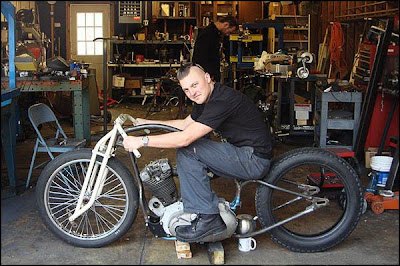 This is as far as Rich got with the bike he started. A sweet little racer.

One day while I was at work I received a phone call that my dad had fallen of a roof. We didn't get much information and it was hard not to think the worst. He had his own business painting metal pole buildings. On this occasion he was painting a John Deere dealership and the roofs were high to accommodate the tall machinery. It was a nasty fall that almost took his life. He shattered one side of his face, his femur and most of the bones in his right foot. He talked about retiring the business just before the fall so it gave him the reason he needed to finally walk away from it. I’m glad he did. I worked a few summer’s on the road with him and absolutely hated every second of it. Form the time you would hit the road you never stopped working. Most of the time we would work more than 80 years a week and that didn’t even include travel time. One meal a day and by the time you checked into a motel it was 9:30 p.m. and you were too tired to eat it anyway. He did this his entire life and I really couldn’t see how or why. My dad and his father before him were the hardest working people I have ever known.

As soon as he was able to walk with crutches he was out on the road riding his bike with a sidecar on it. He couldn’t drive the car but he could ride the bike. He just threw his crutches in the sidecar and blasted into town. I remember one day we got dumped on by a huge snowstorm and he said lets take the sidecar out. I thought he was nuts but I was down for a ride. The cars could barely make it down the road and we were blasting past them. I realized that this was the happiest I had ever seen him. Just living life as it happened.

He decided he would go to school and take machining and math classes. As he sold a piece of his business he would replace it with and milling machine or a TIG welder or a Lathe and it still hasn’t stopped. I never said a word and was happy to go and help him pick up what ever it was he just scored a deal on.

Holy Shit! All of the sudden I had all of the tools I needed to build a space ship… but all I needed to build was a chopper. So I told Rich that I was going to take my motor and build a bike with the Paughco frame I already had. I went to town on it and often found myself turning out the lights at about 3a.m. I didn’t have the first clue about how to use any of the machines but I would learn by trial and error.

So this is the Start of The Locust 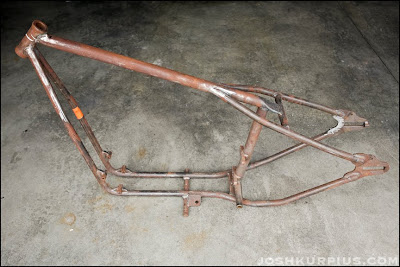 Here is what I started with. I cut out all of the gussets because I had a vision of how I wanted the frame to look and it didn't include the factory gussets. 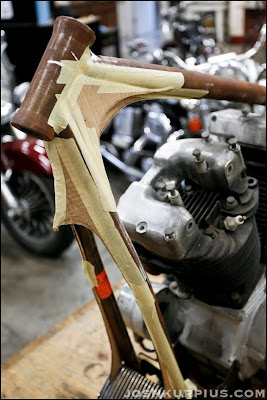 I didn't have the first clue about how to weld so I cut up some Pizza boxes from the night before. I cut the shapes I wanted and planned to cover it with bondo............. just kidding. 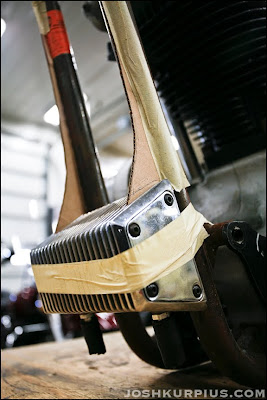 I "tacked" my oil filter/cooler into place and played with some ideas in cardboard first. 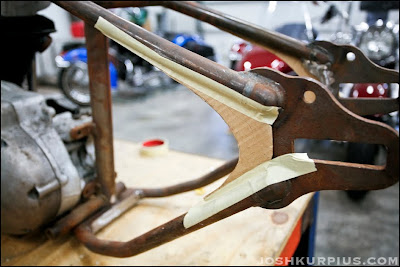 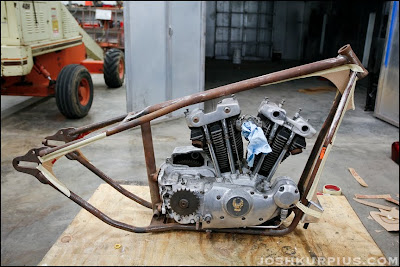 I wanted to build a seventies style chopper so I laid out the molding with cardboard so I could physically see what the final out come would be. 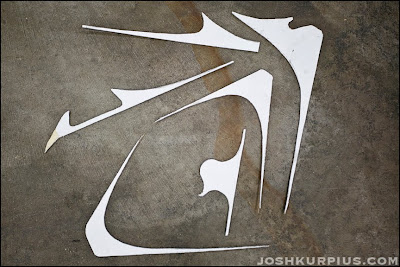 These are my templates after being fine tuned.
Posted by Kid Kurpius at 11:53 PM

Cool - enjoyed reading about your father, and your project. I found your blog because of the video Harley put on Facebook about you. I am guessing you have been getting a little more traffic on this blog because of it. Good luck and BE CAREFUL with that hands-free riding thing!

Good stuff about your dad. Glad he found something he loved and instilled that into you. That's the way it should work.