It was just how it should have been. Parties like these are a good reason to put miles on a bike and honestly it's more about the ride than the party for me. We rolled in just as the night demons were coming out of their holes but were also greeted by the most amazing group of people. No bullshit.... just Beer, Tacos, motorcycles and a good band. We were only in Des Moines a few hours and maybe slept one of them, then fired up the bikes and hit the highway. Jeff and his neighbors were kind enough to let us crash in the woods behind Kung Fu Tap and Taco. It was great to see all of you and meet some new friends in the process. 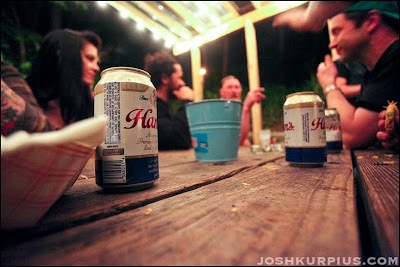 1 Dollar Hamms and 1 Dollar Tacos! Rich it was great to see you again. 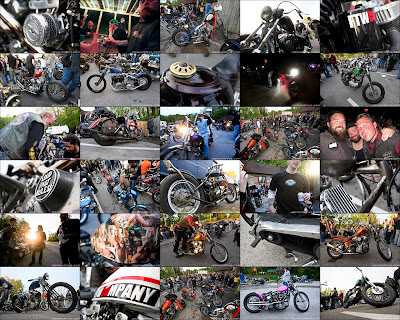 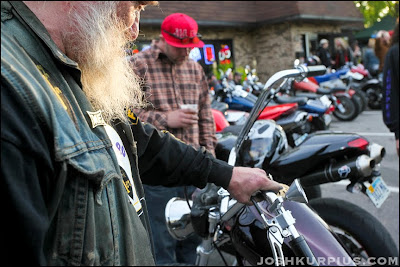 I couldn't describe the feeling I got when talking to Tom Fugle. What an amazing guy with so much history and knowledge. He is still riding a rigid in his sixties and still has the imagination of a child. They say you loose your imagination in your adulthood and I feel in most cases this is true. I value conversations with adults that are able to keep hold of their imagination. Tom built this Evo 15 years ago. 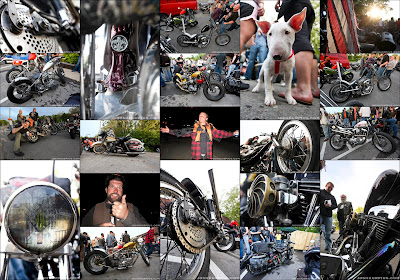 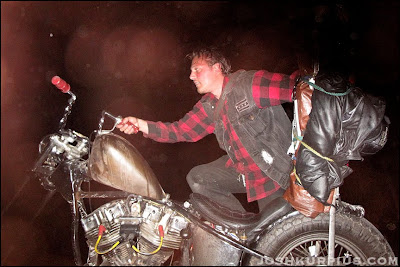 Sum bitches wouldn't let my ride my bike up the hill but I did anyway. "My Bike is my house... just let me ride it up the god damn hill"
Posted by Kid Kurpius at 12:52 PM

DON'T FORGET THE AGGRESIVE TILT ON THE Z-BARS.

Yeah.... what the fuck.... I must have hit that big stump. Those bars were pushed up past my headlight.

I shouldve pushed my shovel up the damn hill instead of trying to ride it shitfaced and launching it up the curb and smashing the shit out of my frame. Seemed like a good idea at the time though...